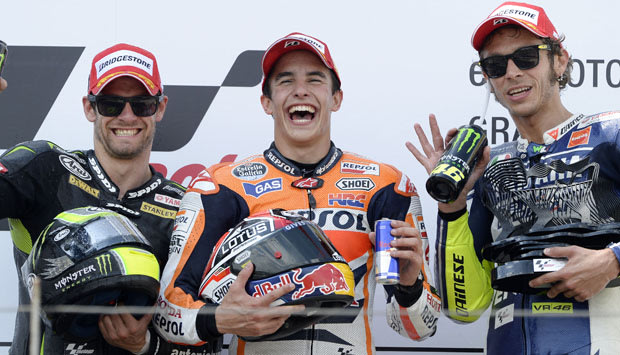 Yamaha rider, Valentino Rossi, did not accept the action of overtaking Marc Marquez, the Repsol Honda rider, who assessed harm him at the U.S. MotoGP at Laguna Seca Circuit, on Sunday. Passports Italian rider was also asked Marquez for disqualification.
“I want to talk about the maneuver especially with Livio Suppo,” he said, Tuesday, July 23, 2013. “So, you and Stoner hit me for two or three years of maneuvering for cutting in corners. Then what you say today, Marquez should be disqualified?” Suppo is intended Rossi Honda team manager.
Suppo was responding to comments by Rossi with ease. “Thank you for the question and thanks to Marquez .. Because, after a few years later, we were finally able to reply to your maneuver,” said Suppo. Rossi then reply to Suppo laughing, “Ah, okay, okay.”
Marquez with a daring overtaking Rossi in the corner of the legendary ‘S’ for the second. Even coming off the track, Marquez still can precede Rossi. After shifting Rossi, Stefan Marquez overtaking Brad and continues to be in pole position to finish the race.
Marquez said he was imitating the action of Rossi on the 2008 racing season ago when overtaking pembala Ducatti, Casey Stoner. “When I saw the video in 2008, I think it’s impossible,” said Marquez. “But while there, I took off the brake a little because there was no room and I passed the same place.”