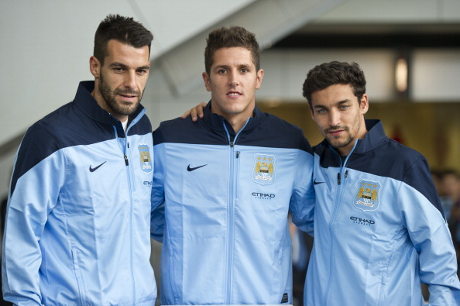 Hong Kong – Manchester City have brought Alvaro Negredo, Jesus Navas and Stefan Jovetic. The presence of the trio of new players, City are believed to have the best squad in the Premier League.

On the market this summer, City have spent more than 80 million pounds ($ 1.23 trillion) to recruit four new players. The first is a Brazilian midfielder Fernandinho.

Then, the City brought Negredo and Navas from Sevilla to cost 34.9 million pounds. Negredo, who scored 25 goals last season in La Liga, plotted as a replacement for Carlos Tevez move to Juventus while Navas will add strength to the midfield ‘Manchester Blue’.

Lastly, City landed Jovetic from Fiorentina to cost 22 million pounds. Montenegro’s young players have become pillars of the Italian club’s players in the last two seasons and is expected to fill the place left by Mario Balotelli.

All three players was on display in the City pre-season tour in Hong Kong. Assistant team manager Brian Kidd was convinced they were able to take City in the Premier League champions again and go far in the Champions League next season.

“They looked very excited. They look very talented and obviously will make an impact,” believe Kidd was quoted as saying by The Sun.