Sao Paulo midfielder has rejected interest Wellington Turkish giants, Galatasaray because just want to play for Inter Milan.
“Players have rejected Galatasaray interest, why? because he just wants to join Inter, “said Gustavo Aribas agent.
“The Nerazzurri are definitely interested, but we still have to continue to negotiate, because there has been no significant progress,” he added.
“The priority at this time to Inter from Juventus after Mauricio Isla’s new focus on the situation of Wellington.”
Sao Paolo willing to release one of the flagship to Europe if one is willing to pay $ 8 million euros.
“We have not talked the technical aspects, but borrowing is an option. About the price is not kapasiya me, “he continued.
Problem Isla, Juventus have confirmed will not sell it, but it is believed the statement of Turin is just a strategy to increase the value of the player in the transfer market.

According to Goal UK, Arsenal have again filed a bid of £ 42 million to acquire Luis Suarez.

Arsenal are ready to pay compensation of £ 35 million transfer to Liverpool plus bonus £ 7 million to get their first big-name signings this summer.

Arsenal chase against Suarez has been developed over the past month. Suarez desire to leave Anfield seems increasingly stimulating Arsenal launching bid to continue. Moreover, the player’s representative said his client is interested in joining to the Emirates because of the lure of playing in the Champions League. Finally, Arsenal bid of £ 35 million, £ 30 million plus a bonus of £ 5 million, Liverpool rebuffed.

The new bid amount is a record for the Gunners. The figure was almost double that of their offer of £ 23.1 million while trying to tempt Gonzalo Higuain. Later Real Madrid striker was more inclined to move to Napoli with a record fee of £ 31.8 million.

The Iraqi Football Association (IFA) was informed of the ban in a notification from FIFA, which cited a spike in unrest that has left more than 2,500 dead from April through June and at least 123 killed in the first three days of July alone.

“Today, we received a notification from FIFA to stop hosting any friendly matches in stadiums in Iraq at the current time, and until further notice, due to the wave of violence,” said Naim Saddam, an IFA official.

FIFA in March lifted a ban on Iraq hosting international football friendlies and the country promptly staged a match with neighbouring Syria in Baghdad’s Shaab stadium just days later, with the national side subsequently facing off with Liberia.

The initial friendly had marked a key step in Iraq’s re-emergence on the world stage after decades of conflict and sanctions.

But the country has been hit by a marked increase in violence since, with recent attacks also targeting football pitches and cafes where Iraqis were watching the sport on television.

In June alone, more than 60 people were killed in at least 10 bombings targeting pitches and cafes, according to an AFP tally.

While the future of Wayne Rooney continues to be associated with Chelsea, David Moyes confirmed that it will play a player who was ‘upset’ when against AIK in Stockholm next month.
“I hope Wayne is located in Stockholm,” said the successor to Alex Ferguson’s Manchester United legend.
“As far as I know he would join, he has started practicing jogging, the situation continues to improve,” said Moyes.
About Chelsea who kept trying to get the British star, back Moyes insists Rooney is not for sale.
“We have insisted he was not for sale and it has not changed”.

Allenatore AC Milan, Massimiliano Allegri predicting Serie A season 2013/2014 will be tough. In fact not denied opportunities Rossoneri Allegri again perched in the top three will be very difficult.

Allegri prediction is not without reason. Rival Milan clubs are now clean up by bringing in new players. Inter Milan, Juventus, Fiorentina and Napoli strengthen the ranks in the transfer market this summer.

Last season Milan managed to finish third after a stumbling start to the season. Milan is under Juventus and Napoli to make sure to appear in the Champions League.

“Every year is different but Juventus still the favorites in my opinion. They bring in quality players sorts [Carlos] Tevez, [Fernando] Llorente and [Angelo] Ogbonna,” said Allegri reported by Soccerway.

Therefore, Allegri confident competition in the top three will be tight this season. “It would be more difficult for Milan than last season because Juve and also six other teams will fight for the top three,” said Allegri.

“Inter Milan became stronger with the arrival of [Walter] Mazzarri and they will play once a week. Romans brought [Kevin] Strootman, a player with vast experience, although still young,” said Allegri.

“So also with Napoli, Lazio and Fiorentina will be increasingly difficult to be conquered so the competition will be tougher,” he continued.
For Allegri, this season will be the fourth season after being appointed coach of the Rossoneri in the summer of 2010. 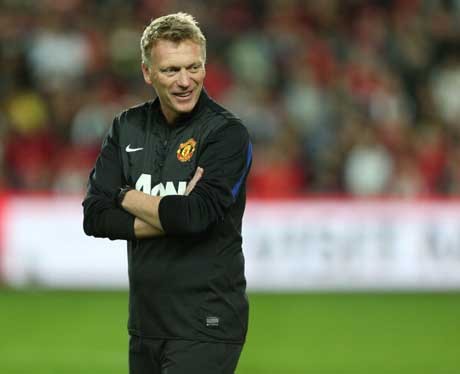 Melbourne – David Moyes did not deny that there is a sense of fear of failure related to his position as manager of Manchester United. But at the same time he was also sure that the work at the Red Devils right for her.

The big challenge awaits Moyes after he was appointed as the new manager of Manchester United replace Sir Alex Ferguson. Scottish man was required to continue the winning tradition of the Red Devils who have won so much success with Fergie.

Worry about that arise, Moyes does not deny it. But the taste is actually used as motivation to strive for the best results.

“There is always an element of fear that comes along when you become a manager of a club like Manchester United. It makes you continue to work, it makes you focus and keeps you focused on them,” Moyes said in The Sun.

Even so, the 50-year-old coach believes that Manchester United is the right job for him. He was hoping to meet the expectations upon him.

“All the people who receive this work will have doubts. But in my own way I tell if this is the right job for me at the right time and hopefully I can run it.”

“I do not say that everything will go smoothly, but I feel comfortable with my position,” said Moyes.

Udinese seemed to have made coach Francesco Guidolin geeks fall in love without thinking so willing to sign a new contract offered to him.
In his new coach 57-year contract that would keep refine Udinese until June 2017.
“I have to thank the club,” said Udinese coach who came to it in 2010.
“We have been talking about a new contract extension since a few months ago”.
“I am proud to continue coaching this squad, renewal of contract is the culmination of a remarkable season that we went through last year,” he said.
“(Contract) in accordance with my wishes, here are ideas and projects, terimkasih to all my staff”.
According to the coach who has coached many Italian clubs, since he no longer gush Udinese could think to coach another club.

The sponsorship, worth S $ 1.8 million, will include flights of for the under-21, under-23 and senior national teams, as well as the National Football Academy’s age-group teams and women’s teams.

The partnership with FAS is set to provide the Necessary support to the association to further gamers footballing success and raise standards for all levels. The Singapore national football team are the recent Victors of the ASEAN Football Federation (AFF) Suzuki Cup campaign.

AirAsia will also offer “attractive travel packages” for football fans traveling to away matches, it said in a release.

“I never looked at the commercial aspirations … but to aim high and do something meaningful for Singapore football,” said AirAsia Group CEO Tony Fernandes.

“Having AirAsia on the Singapore jersey is important, we want to put forward the message that we want to do better, that we want to dream. We hope to be part of that success; to help some of those young kids Realise their aspirations. ”

Mr Fernandes added that the sponsorship does not have “a fixed set of rules”.

“Whatever comes up with the FAS and requires our assistance, we are ready to help,” he said.

FAS President Zainudin Nordin said he is “absolutely thrilled to have concluded an agreement with an organization of AirAsia’s caliber and reputation”.

“We are really thankful to Tony Fernandes and AirAsia for their staunch support for football and we are looking forward to working closely with them to further promote the sport in the coming years,” he said.

He added: “It is a positive thing for us, Because Mr Fernandes and AirAsia are supporting youth, and sports in particular.”

In the eyes Siregar, Hazard complete player with skill. Although still young, the former Lille player has managed to penetrate the main team of the Blues. Siregar want to learn the speed and technique possessed Hazard.
“Although Chelsea are not favorites. However, I like to Hazard. He is young and fast players. Hazard has high techniques,” said the Manchester United fans.

Despite facing an opponent whose class in the Indonesian All-Stars, it did not make discouraging dropout mentality SAD Uruguay’s players. Siregar hope, Indonesian All-Stars could provide fierce resistance in the presence of Jose Mourinho’s side are.

Players that play for DC United’s asking Indonesian All-Stars squad can reap the experience during a duel contra Chelsea. According to him, the match against the European team can be the parameters to measure strength.

“Hopefully (offset Chelsea). Against Chelsea, we should be able to take a good lesson. Could be a lesson to achieve the best results going forward. Together we must learn in this game,” revealed Syamsir proceed.