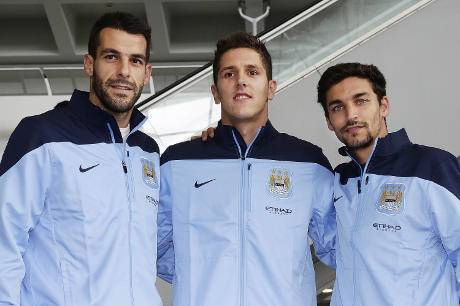 Hong Kong – Manchester City have spent a lot of money, although the new transfer window opened earlier this month. But it is not a guarantee to be able to bring the Citizens success next season.

So far four players brought in by the City that Fernandinho, Jesus Navas, Alvaro Negredo and Stevan Jovetic. Total of about 100 pounds, also has spent to bring his fourth club management.

With the new transfer window ending 2 September, it is quite possible there will be another top names who entered into such habits City Etihad Stadium in previous seasons, which always bring in star players.

Examples are when winning the Premier League in season 2011/2012, they are investing heavily to buy Sergio Aguero, Samir Nasri, James Milner, David Silva, and others.

When compared with city rivals Manchester United, who are still cool and calm in this transfer window, City may say one step ahead in preparation for the title next season. But that does not mean they will be easily able to snatch the title from Manchester United.

“It’s not enough just to spend a lot of money, I think the other teams are also doing the same thing. Should be something special, but we will do what we can in preparation for this time period,” said team captain, Vincent Kompany, as reported by ESPN.

“Buying new players are important, but the way we make preparations so far so good and we want to do our best to be a team that can compete in all competitions,” he continued.

“You can ask this to five or six clubs and certainly the same answer. Premie League That’s why so most competitive league in the world.”

Kompany further mention that solidity team during the current season is the most important thing to be able to bring the team’s success. Unlike last season where City many internal problems plagued the team that one of them dispute with Mario Balotelli Roberto Mancini.

This is also a hard task that must be carried Manuel Pellegrini as the new City Manager. Especially in the last two test matches they always defeat in the pre-season tour to South Africa.

“Football is more than just buying a new player.’s About the team, be a family and he himself also. When he came, we ensure comfort for him because it is not easy being away from your home,” said he.